Continuing my experiments with food in the city famous for its street food.

Did you know Singaporeans don’t cook at home? Not just in today’s age of the fast pace world, but from a few decades, when the hawkers from the roads were cleared and given spaces to create food courts which have now mushroomed all over the country. From the poor to rich everyone eats out. Though not exactly community kitchens, but serving the same purpose, there are food courts less than 500 mtrs away from any residential space, which offers all the local cuisine cooked fresh and hygienically.

So after trying to cook at home for a while, doing the dirty dishes, spending more than 3 hours everyday in a previously unknown territory, I decided to try out something more adventurous.

The first couple of trials in the local food courts which are usually found in cheap government housing areas, catering to locals who are primarily non vegetarians, I found myself completely clueless and sometimes driven away when I asked for “no meat, no fish” variety. Not that I had any sentimental issue in not trying non-veg dishes, but the odor of most non-veg stalls would keep me away. Finally, in a shopping mall food court I was treated with a few options which I could try. This is what my 4.8 dollar meal (cheapest till then) looked like. 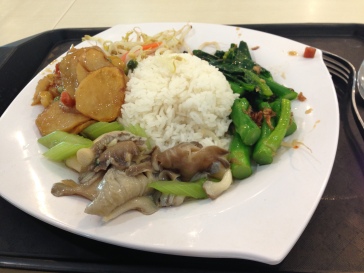 Well, I think they try hard to make their food look like non-veg. Nonetheless, I managed to eat this stuff and even like some of it. Though I haven’t returned back to this stall since then!

Next, it was turn to try out more “western” and “cosmopolitan” options easily available. Something less alien to the tongue. 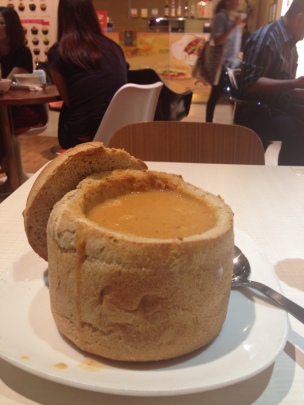 This is soup in a bread bowl. Very satisfying and filling. Now soup, wine and pasta became my staple diet. 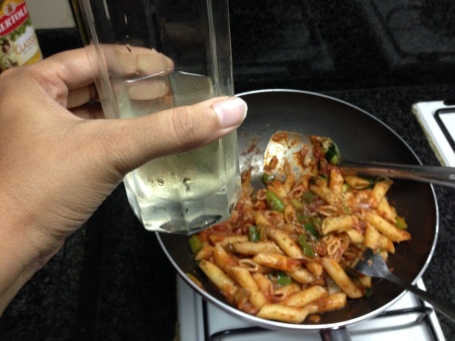 But, the local cuisines were still to be tried. So many times I had seen locals having a big bowl with all veggies, meat and noodles in a soup. And so many times, hungry and tired, I had to run past those stalls, afraid that I feel nauseated. Finally I got my chance to try a Singaporean cuisine in a vegetarian restaurant. Would you believe the dish below is a vegetarian item? 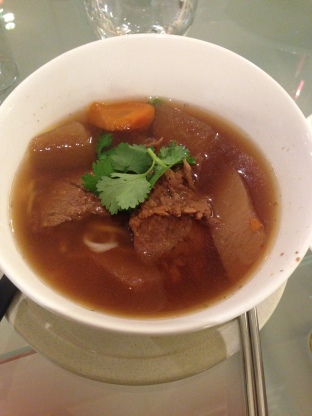 As it turned out that the vegetarian option simply meant replacing all meat with meat-like tofu, I was quite disappointed. Who had thought, I would now have to develop taste for veg food too! :) Though the spices and flavor of the soupy stuff were pretty good, but the rawness of veggies and meat-like texture of soy, plus the spoon evading noodles made this meal one of the toughest I had ever have!

But the good thing is that experimenting days are only on weekdays. Weekends are for indulgence. And Singapore can indulge you in a very best manner! Every Saturday, I have to have this “to-die-for” french toast in a nearby al fresco cafe by the river. For those few hours I feel I am on a Paris street savoring the best meal of the week. :) 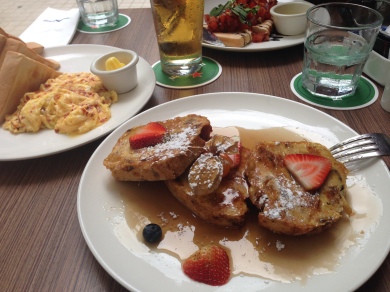 Next on trail are Chinese veg cuisines, nasi lemak being on the top of the list. Keeping my fingers crossed! But for now, the weekend is near. ;)